Example: _sip._tls.example-1.com. would be the service record for web requests for “example-1.com”.

We will create an SRV record for web requests for  testserver12.com  with 0 as the highest priority and 0 as the highest weight (lowest number). If the host was a fully qualified domain name (FQDN) outside of example.com, we would enter the full FQDN and end the hostname with a dot (.) to prevent the value from being appended to the end. Then click submit. 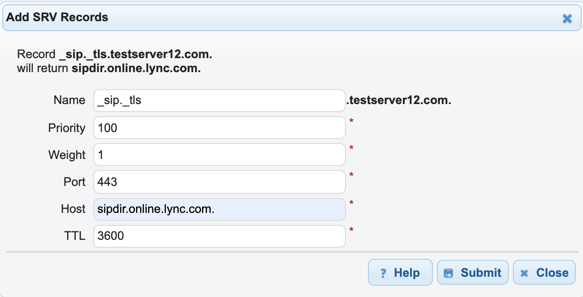 Host – The system that will receive the service. (please make sure that you add the dot at the end of the FQDN.)

Priority – This acts the same way as the MX Level/preference in the MX record. The lower the number in the priority field, the more desirable the associated target. 0 is the highest priority (lowest number).

Weight – Allows the zone administrators to distribute the load to multiple targets (load balance). It is used to determine relative capacity and load between two SRV fields within the priority. Hits will be assigned proportionately by weight. This will allow the administrators to have a powerful and weak server and share the appropriate loads between those systems. 0 is the lowest load.

Port – the actual port of the service offered.
TTL – Time to Live, measured in seconds, determines how long the record is cached in resolvers.